CLEVELAND HEIGHTS, Ohio -- Every year, March 19 is a special day in the life of John Prcela, for it is the feast day of St. Joseph, to whom the Cleveland Heights resident has devoted much of his life researching and revering.

Since 2012, Prcela has written four books about St. Joseph and is looking forward to an upcoming book release by Croatian Dr. Vlado Vladic, The Original Justice of St. Joseph, which is largely based on Prcela’s writings about the mystery of St. Joseph in the drama of salvation. Prcela, himself, has a book coming out soon, formatted by daughter, Maria Prcela Jackson, to be titled, Joseph, The Son of David Reflections. 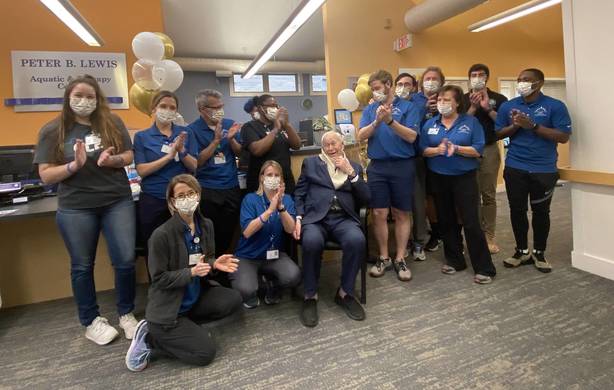 The staff at the Peter B. Lewis Aquatic & Therapy Center at Menorah Park in Beachwood applaud John Prcela during a celebration of his 100th birthday on March 9. As he does each day, Prcela entered the center by saying his catch phrase to staff -- "Keep smiling." The center has created masks and wristbands using the phrase in Prcela's honor.

What’s more, the father of four’s only son was born -- he believes not coincidentally -- on March 19. That son, of course, he named Joseph.

This year’s feast of St. Joseph falls during an important year for Prcela as, 10 days earlier, on March 9, he celebrated his 100th birthday. Known for perpetually being in good spirits, Prcela was joined by about 250 friends March 13 to celebrate his centennial birthday at the Mayfield Village Community Room. At that celebration, Cleveland Heights Mayor Khalil Seren presented to Prcela a proclamation to mark the milestone.

At 100, the native of Croatia said, “I feel great. I have a lion’s appetite. I still love to do chores around my house. I’m looking forward to planting tomatoes.” Prcela also goes to the pool at Menorah Park in Beachwood three times per week to exercise. 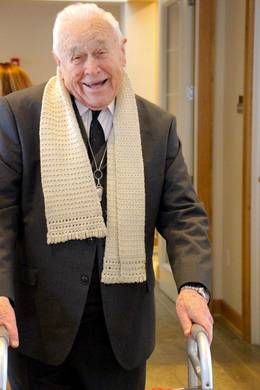 John Prcela shown here at the March 13 party celebrating his 100th birthday, which occurred four days earlier. The Cleveland Heights residents and former teacher is the author of several books.

Because of his positive outlook on life, kindness and continued activity, his daughter, Maria, noted that he has more Facebook friends than do his eight grandchildren. In fact, his coming book is based on reflections Prcela has posted on Facebook, which are well-received by friends around the world.

During his early life, Prcela faced many tough times. At 16, at the start of World War II, he was enrolledin a seminary. In 1945, Prcela was conscripted into what he calls the “cruel Yugoslav army.” Due to massacres the army carried out in the hinterlands of Trieste, Italy, Prcela deserted from what he terms a “Hitler-type army.” He made his way to Rome and enrolled as a theology student.

After recovering from a two-year illness, Prcela sailed for the United States in late 1949 and lived for a while in Chicago, before moving to Cleveland in 1951. He subsequently graduated from John Carroll University and then, three years later, in 1957, earned a master of arts degree from Case Western Reserve University. From 1954-88 he taught Latin, French, Spanish and German, first at St. Edward High School, through 1958, and then at Brush High School, through 1988.

Prcela met his now late wife, Amelia, after seeing her in church while on a vacation trip to Spain in 1963. Also a devout Christian, Amelia, who died in 2002, asked Prcela to write a spiritual family history, which became his first book about St. Joseph, St. Joseph, the Virginal Father of Jesus.

It is Prcela’s feeling that St. Joseph’s role in the life of Jesus is too often overlooked. He calls St. Joseph “the savior of the Savior.” His daughter said Prcela well lived up to the ideals of being a father set by St. Joseph.

Speaking of her father, Maria Jackson said, “My dad came to this country with nothing. He worked hard to educate himself. He worked very hard, so did my mother. He put the four of us (she and her siblings) through Catholic education -- eight years of Catholic grade school, four years of Catholic high school.

“Hard work, faith, perseverance, and being a good person --really finding the good in everything -- is what my dad is all about. With faith, hard work and perseverance, he showed you can make it through anything. I’m just so proud to call him my dad and so proud to be his daughter. He’s my best buddy, second to my husband.”

Maria said that, as a school girl, she used to look out the window of the Prcela home waiting for her father to return home from his day of teaching. “I would jump for joy when I’d see him saying, ‘My daddy’s home! My daddy’s home!’” she said.

Of his positive view of life, Maria said, “He always finds the positive in a bad situation. He can find good in all people. He’s really lived the way, as human beings, we should all live. God made us all different, none of us are perfect, but in each of us there is something good.”

A member of both Sacred Heart of Jesus parish in South Euclid, and St. Paschal Baylon in Highland Heights, Prcela, says of the future, “I’m dreaming of doing much more for the glory of St. Joseph.”

Prcela said he would asked on the occasion of his birthday what he would do if given another 100 years. “I said I would spend every single moment of my life to promote the glory of St. Joseph because he is very much neglected in the Church, even now days.”

"Sally received nothing but great care from her time at Wiggins Place and Menorah Park. You and your staff were always caring and professional. I could not have asked for a better place for her final years."