Menorah Park and Montefiore are now one integrated foundation and will continue to honor the rich philanthropic legacy of all of our past benefactors.

Left Brain, Right Brain, and Attitude Help with Healing after a Stroke 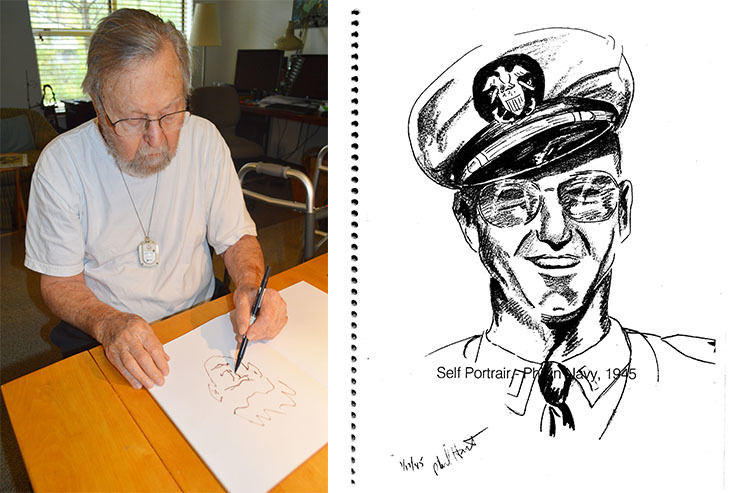 Stroke survivor Phil Hart knows that in the blink of an eye your whole world can change. “Life is different after a stroke,” he says. His mantra: You have to reach into yourpupik, a Yiddish word he uses to refer to his ‘gut’,and find the fortitude to roll with the changes. That is what the retired architect, politician, scholar, and navy manisdoing now to deal with a stroke that tried to take from him what he would not give up: his creativity through drawings and writings, and his gumption to get the use of his hand back. “I like to take on battles. I’ve won many and I’ve lost many,” he says. This one, he intends on winning.

Phil spent his life as a right-handed man, creating dynamic and fascinating designs that were unmatched. The stroke he had in the fall of 2016 left him with a right hand that didn’t function as it did before. That was hard to adjust to, but he did. “The left hand just took over,” he says, and he continued to do what he loves; create. Many of his drawings go with his writing; a collection of thoughts and observations on life. He has more than a thousand “Musings”, as he calls his collection.

While his book was recently published, before that, he shared his writings with a list of about 30 people, affectionately called his Muse-kateers. He draws people, buildings, a camera, and other pertinent items that strike his fancy. He sketches a man in 30 seconds and smiles. “It just happens like that,” he says. Phil’s not worried that it may not be as good as it would be with his right hand. “The best expression I know: Anything worth doing is worth doing badly.” His message: "You can’t immediately be great at everything. You just have to keep trying and you will get better."

At 95, he laments from his Wiggins Place home, he has lived many lives in his years on earth. He is a very sharp man with a list of scholarly achievements too long to mention. He retired in 1988 from his own firm, Philmore J. Hart Architects, a profession he loved since 1956

He’s taking in stride that everything has its challenges. The key, he says, is to keep on doing what you love, work hard to fix what needs to be fixed, and don’t stop using both sides of your brain. When life presents challenges like a stroke, Phil says, “It’s an opportunity to remake yourself the way you would want to be.” Phil is doing just that. Physical and speech therapy at the Peter B. Lewis Aquatic & Therapy Center was his starting-line to the healing and strengthening process, and with Phil’s determination, he’s apt to inspire others to not give up. Phil is proud of his three children, Mitch, who he describes as a BMW "genius", Dvora, a marine scientist and photographer, and Nina, a published creative writer. He has two grandchildren. His wife Adelle, of blessed memory, worked at Menorah Park for 16 years as the assistant to the past CEO Howard Bram, of blessed memory.

Have you suffered a stroke? For more information on physical, occupational or speech therapies, or the LSVT BIG® and LSVT LOUD® programs, please call 216-595-7345.

"Having mom close by means the world to us. Of course, we are so pleased with the good care mom has been getting. But more than that, we are all at home at Menorah: we play mahj, we enjoy the Piazza, we celebrate Jewish holidays, the grand-kids visit, we..."