For retired music teacher Carol Spero, retirement meant new ways to impart her love of music to others.

A talented pianist, when Spero isn’t striking the keys at her piano in her Lyndhurst home, she is playing for residents on the Menorah Park campus, both within its care units and to larger groups at R.H. Myers Apartments in Beachwood.

“I play piano to bring some cheers and smiles to the listener,” said Spero, who attends services at The Temple-Tifereth Israel in Beachwood, where her son is a percussionist in The Temple rock band. “(Playing at the Menorah Park campus) draws residents into the lounges where the piano is. I usually play for a good hour, where residents throw out songs they want me to play and they’ll sing.” 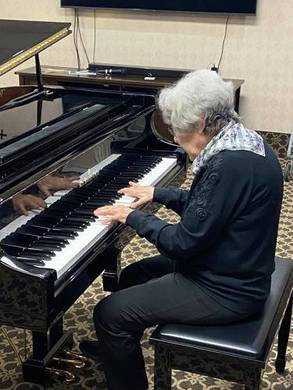 Carol Spero at the piano at R.H. Myers Apartments in Beachwood, where she plays for residents.

Recently, she said “a cute thing” happened to her – where a man walked up and asked her to play him a song, but he could only remember a few basic notes. Humming the beat to her, she took the general sound and played him something new on the spot. While “it wasn’t really his song,” the minor chords inspired him and excited him, she said.

When not at Menorah Park, Spero also sometimes volunteers with the Community Partnership on Aging and Jewish Family Service Association.

CJN: When you retired, why did you want to want to stay involved?

Spero: I wouldn’t call what I do “volunteering.” That is a commitment, and R.H. Myers first wanted me to commit that I would come every week on the same day to play. But, I couldn’t do that – take on another commitment. There are times when I can’t drive, whether that’s my health or the weather. But, I left my calendar free and they said they’d call when they’d like me to do a program. Recently, they called me the day before Election Day and we did a voting-inspired concert to get people out and vote on Nov. 7. All of the songs weren’t about voting, but we did have one that was, where we passed out the lyrics and had everyone sing along. So, I do play when the occasion arises, it just seems that those occasions are quite frequent. 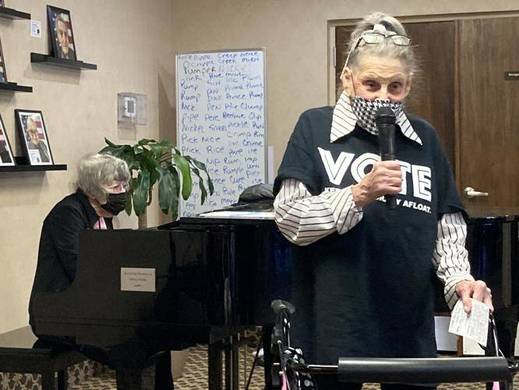 R.H. Myers resident Jane Friedman sings with Carol Spero on piano at a concert Nov. 7 at R.H. Myers in Beachwood.

CJN: What made you want to utilize your musical talent?

Spero: I have this God-given talent of being able to play the piano, improvise and make up music. When you retire but have an inner talent to do something, you’re going to want to share that with others rather than start something from scratch. I did this during my career as a substitute teacher and said, well, now I can do this for everyone else. While working, I would take the school curriculum and put it to music because it was another way for students to learn, especially those who had problems learning. Music is a great tool, no matter the age. It goes inside of you and affects you, especially when you play a tune someone recognizes.

CJN: What is your favorite part of your work?

Spero: It is all extremely gratifying to me. When I finish, I feel like I have given an entire concert at Severance Music Center. I feel that way because I’ve accomplished something so great. I brought something out of the listeners that they didn’t have before. It is very rewarding for me to know I’ve done something for them. They have also done something for me. I can’t play alone. I need that audience interaction. 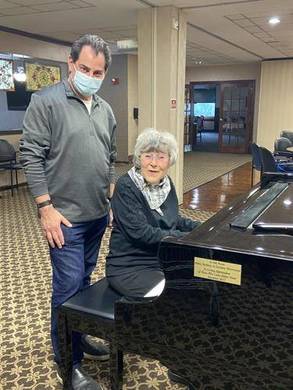 CJN: Why are volunteers important?

Spero: We’re doing something and giving of ourselves to make others feel good. That is the basis of it. I play to inspire and open people up to things they haven’t done, thought of or even felt for a long time. It brings a smile to their faces, saying things like “I haven’t heard this since junior high.” You can’t imagine the feeling. It’s an absolute treat, bringing the world of music to people. And personally, I had volunteers come to my home when I broke my wrist and had a nine-week recovery. I had someone here five days a week. As soon as they walked into the door, I would play a song about them and what they were doing for me that day. Playing that gave them cheer, almost like giving them a bouquet of flowers. So, I’ve been on the other side of it.

For other retirees seeking ways to get involved in their free time, Spero suggested tapping into their talents and sharing them with others.

“It doesn’t have to be a significant talent, it can just be knitting or even drawing in a straight line,” she said. “There is such a need to give. There are not enough of us willing to give our time and do things for others. So, I can’t recommend it enough. Even if you only give 50%, you get 100% back.”

Retirement year: 2002 from teaching music, but was a substitute classroom teacher for another 10 years in Shaker schools.

Hobbies: Carol is a songwriter and likes to put words to melodies that she or others make up on the spot.

"Dear Menorah Park Dad seems to be settling in to the program. You have quite a few gems on your team there. The care I have witnessed has touched me. I know that you see it every day- but your services are invaluable to both the participants and their loved ones. I have seen..."

– You Have Quite a Few Gems on Your Team!