Music provides a connection even after verbal communication fades.

CLEVELAND — We met Antonia Bennett in September when she came to Cleveland to judge the 2022 Shining Star CLE High School singing competition. The event raises money for memory care services at Menorah Park, including funding for music therapy for residents. 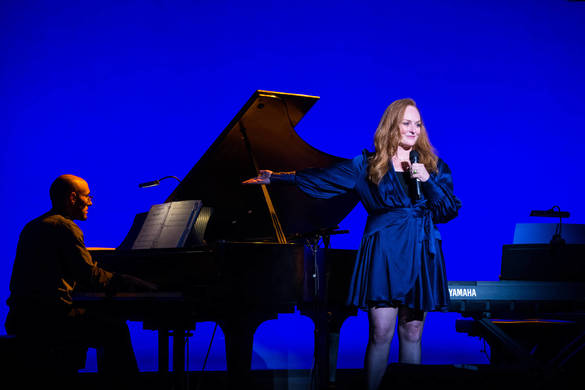 Antonia Bennett felt a connection to the cause. Her life Is the great American songbook. She's an acclaimed jazz singer and learned from the legends, including her father, Tony Bennett.

In 2015, doctors diagnosed Bennett with Alzheimer's disease. His daughter knew something was off months earlier.

As his disease progressed, his vocabulary seemed to diminish. He became quiet, but was able to hide it well.

"He's so good at going with the flow and I really attribute that to what it is that he does for a living. He's a musician. He's been traveling for years and he just shows up. He's so professional," Antonia said.

And his brain didn't forget the music. When his piano player comes over, it's like a switch flips.

"A couple days a week he comes over, runs the show with him, and they go over songs and you know, when he's prompted, he does what he's asked," Antonia explained.

Music therapists at memory programs, such as Menorah Park, see that music often lights up the eyes and brains of residents.

"If you get to the level of professional performance you have expanded the allocation of brain to that performance and built new connections with other areas, with hearing, with speech, with attention to the cues," says Dr. Charles Duffy, director of University Hospitals Brain Health & Memory Center.

Dr. Duffy says it's not just music, if someone is repeatedly doing the same task for years, including when the memory begins to decline, the skill set may be the last to go.

Antonia added, "I think it's good to keep your loved ones in a routine. I think that helps and to just accept whatever stage they're at and take the good and try to focus on those."

She's actually taken some music therapy classes because of what she's witnessed with her father. Her advice to other families dealing with this devastating diagnosis?

According to the Alzheimer's Association, music may reduce agitation and improve behavioral issues, common in the middle-stages of the disease. Even in the late-stages, a person may be able to keep a beat or sing lyrics to a favorite song.

Music provides a connection even after verbal communication fades.

"Calling hospice is not about giving up, but rather it’s about allowing people control over their lives up until the end, surrounded by those they love in a compassionate and caring setting."