Know the Keys to Spotting Early Signs of Dementia

Knowing the differences between distraction and cognitive decline can help you and your loved ones better prepare.

As we approach our “golden years”– or watch our parents do so – many of us begin to regard forgetfulness in a new, more ominous light. Walking into a room only to realize you don’t remember what you came for or not being able to recall the name of an old colleague you just bumped into can seem like early slips in an intractable slide toward dementia.

The good news is that’s probably not the case.

Memory lapses, like forgetting where you parked the cars or put your keys, are signs of distraction, not dementia, according to Nancy Sutula, vice president of residential services at Menorah Park in Beachwood. 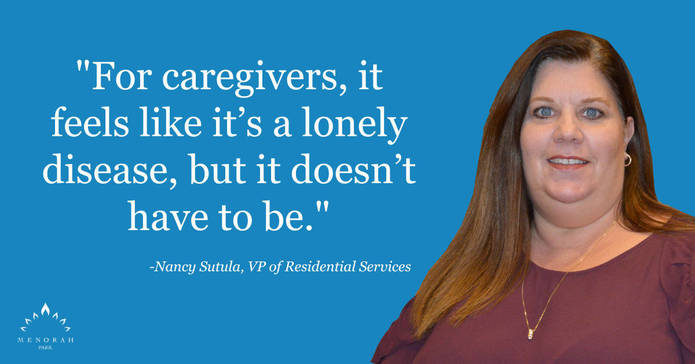 “Now, if you or a loved one starts having issues with not recognizing familiar faces or getting lost while driving somewhere that you are typically comfortable navigating, that is different,” Sutula said.

The Alzheimer’s Association estimates that 12-18% of Americans 60 and over have “mild cognitive impairment,” a category of memory loss or cognitive problems that may be a precursor to dementia or caused by other medical issues. It’s a condition that can go undetected as many of us assume that decline in memory is a normal part of aging.

Aging can impact the brain’s processing speed and attention span, but confusion and memory loss are not part of the healthy aging process. To clarify further, Sutula explained that changes seen in people suffering from cognitive impairment aren’t mere inconveniences; they interfere with the person’s ability to carry on with normal daily activities.

Individuals suffering from the early stages of dementia may start to have trouble paying bills, for example, or making travel plans. They might forget their way home from the grocery store or have trouble adequately expressing themselves. They may struggle to cook, care for themselves or complete other familiar tasks. Withdrawal or changes in mood and personality are other symptoms, she added.

“When people that are typically very social begin to kind of retreat into themselves and start to not enjoy the things that they used to, it could be a sign that something is happening and they’re trying to hide that,” Sutula explained.

Other warning signs of dementia, according to the Alzheimer’s Association, include trouble solving problems and/or understanding images and spatial relationships; confusion with dates, times and places; and an inability to retrace steps to find those pesky misplaced items.

It’s important to see a doctor and get evaluated if you or someone you love starts experiencing some of these signs of memory loss, partly because other conditions – most notably depression – can mimic dementia. Delirium, sleep apnea, medicine imbalances and certain infections also can present with similar symptoms.

“Those things are temporary and reversible,” Sutula said.

And while dementia is neither temporary or reversible, getting evaluated early is the key to establishing a cognitive baseline and tracking the disease’s progression, she said. Doctors and caregivers can then monitor changes over time and adjust treatment and caregiving regimens appropriately.

“There are medications, but they do not stop the progression of the disease unfortunately,” she said. “Doctors will typically try to help manage some of the symptoms with medication.”

Sutula also advised caregivers facing a dementia diagnosis of a loved one to act early and strengthen their support networks both inside the family and with outside groups.

“For caregivers, it feels like it’s a lonely disease, but it doesn’t have to be,” she said. “There’s a lot of people who are experts or who have been there and can help, if only to make you feel like you’re not alone.”

The Alzheimer’s Association provides information, articles and even a live chat link for caregivers of a person with Alzheimer’s or dementia at alz.org/help-support/caregiving.

The Family Caregiver Alliance connects caregivers with others who are facing similar struggles. Visit caregiver.org/connecting-caregivers/support-groups.

Memory Cafes, located in churches, medical facilities and community centers around the country, give caregivers and patients with cognitive issues a safe space to socialize. Visit memorycafedirectory.com.

The Cleveland Clinic operates healthybrains.org, an online resource that allows anyone to access their brain health and learn more about how to preserve your memory.

Delta Dental of Michigan, Ohio, and Indiana is a leader in the dental benefits industry, and now offers DeltaVision®, a vision benefits package in partnership with VSP Vision Care. In addition to providing superior dental and vision benefits, Delta Dental of Ohio invests in initiatives that build healthy, smart, vibrant communities for all.

"Calling hospice is not about giving up, but rather it’s about allowing people control over their lives up until the end, surrounded by those they love in a compassionate and caring setting."