Our own Violet Spevack is celebrating her 106th birthday on July 15.

Now living at Menorah Park in Beachwood, where she is the oldest resident, Spevack chronicled the social ongoings and more in the community for the Cleveland Jewish News for 50 years. Her first column appeared on March 5, 1965 – just about five months after the CJN debuted. At her retirement at age 98, her column was recognized as one of the longest running columns written by a single person. 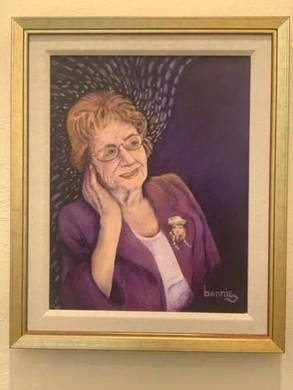 Violet Spevack’s daughter, Bonnie Chisling, painted this portrait of her mother through a window during the COVID-19 pandemic.

In her weekly column, Spevack chronicled the events of the Jewish community, covering social events, reporting on family occasions or class reunions, writing profiles on prominent leaders, and interviews with entertainers, dignitaries and religious leaders.

“Violet is content in Menorah Park where she is surrounded by her honors, her many albums of her columns and her family photos and paintings,” Bonnie Chisling, Spevack’s daughter, told the CJN. “She has led a long and fruitful life during which she has never complained and, by the way, was never sick. She remains the matriarch of her family.” 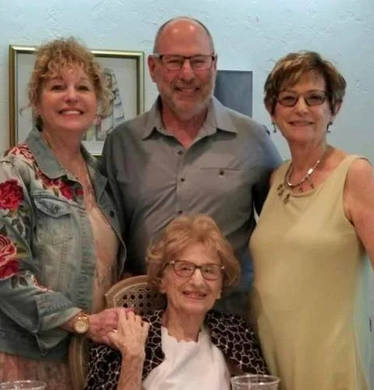 In this 2020 photo, siblings Dina Spevack, from left, Jeff Spevack and Bonnie Chisling celebrate the 104th birthday of their mother, Violet Spevack, at Menorah Park in Beachwood.

The Cleveland Jewish Publication Company created an editorial internship named for her, which is supported by funds raised in her honor through the CJN Foundation.

Spevack’s younger sister, Gertrude Weiner, who is 101, lives at Stone Gardens on the Menorah Park campus.

Spevack was married for 73 years to her husband, David, whom she met on her way to a Hadassah convention in Toledo. He died in 2013 at age 101. Spevack has three children: Bonnie (Michael) Chisling, Dina Spevack and Jeffrey (Beverly) Spevack. She has four grandchildren: Mark (Stephanie) Chisling, Brian (Pamela) Chisling, Anne Spevack (Christoph Neyer) and Sam Spevack; and five great-grandchildren. 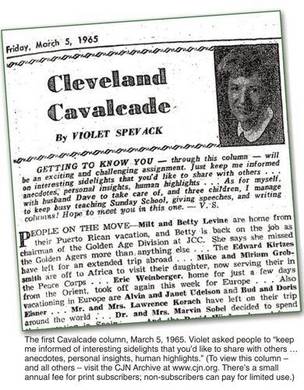 Violet Spevack’s first column appears in the Cleveland Jewish News on March 5, 1965, about five months after the creation of the CJN.

"Dear Menorah Park Dad seems to be settling in to the program. You have quite a few gems on your team there. The care I have witnessed has touched me. I know that you see it every day- but your services are invaluable to both the participants and their loved ones. I have seen..."

– You Have Quite a Few Gems on Your Team!