The Menorah Park Foundation in Beachwood held its eighth annual Home Run 5k on May 1 at Ursuline College in Pepper Pike. The event marked the first in-person run since before the COVID-19 pandemic, during which the run was held virtually. 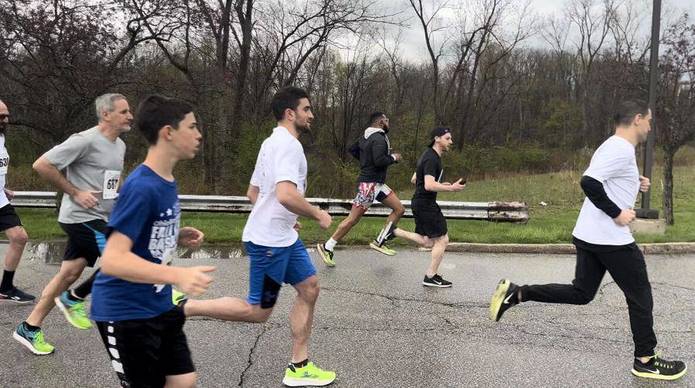 The morning began with thunderstorms, which eventually let up long enough for the run to proceed, much to the gratefulness of runners, walkers, staff and volunteers.

“(It’s the) first year back in person after a couple years off so the turnout, we think, is good for a first time coming back together like this,” Menorah Park CEO Jim Newbrough told the Cleveland Jewish News. “The weather, as you can see, was not the best, but I think we got great support, great turnout, great volunteers so we’re excited about it.”

Marty Shankle, associate board co-chair, estimated a turnout between 150 and 175 individuals.

“We’ve been doing it remote the last two years, so we were intrigued to see how many people were coming and we’re really happy how many people came out today,” Shankle told the CJN.

Jane Furth, director of annual campaign and outreach, stated that $85,000 has been raised so far.

“I’d like to thank all of our volunteers for coming out, as well,” she said.

David Saltzman, associate board co-chair and participant in the race, expressed his gratitude for the funds raised and that the weather ended up working out.

Brian Sokol, chief development officer at Menorah Park, told the CJN. “We’re pleased that the weather cooperated and we were able to conduct a successful event.”

"Sally received nothing but great care from her time at Wiggins Place and Menorah Park. You and your staff were always caring and professional. I could not have asked for a better place for her final years."